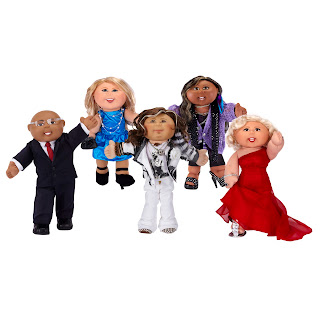 Celebrities including Steven Tyler, Al Roker, Katherine Heigl, Kristin Chenoweth and Raven Symone are recreated as unique, one-of-a kind Cabbage Patch Kids that will be auctioned on eBay with proceeds benefiting Children’s Action Network (CAN), a national adoption awareness organization dedicated to finding homes for children in the U.S. who are in foster care.

All proceeds of the Steven Tyler, Al Roker, and Raven Symone Celebrity Kids will benefit CAN, while Kristin Chenoweth and Katherine Heigl are donating 50% of funds to CAN and the other 50% to Maddie’s Corner and the Jason Debus Heigl Foundation, respectively.  So, head on over to eBay and check it out!
Posted by Mommy at 8:42 AM