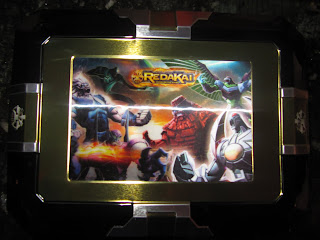 ...a 3-D trading card game like no other!  Redakai uses the characters and setting of an animated series of the same name that recently debuted on the Cartoon Network.  Since I am no expert in trading card games, I called in my 9 year old nephew, Luke, to help.  He loves Bakugan, so I knew this would be right up his alley. 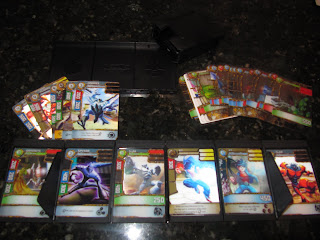 Right off, he LOVED that the cards were in 3-D.  He just thought this was the coolest effect ever.  Luke also liked the animation of the cards once you start stacking them during play.  It was so much easier to keep track of damage, power upgrades and character status because the cards do all the work for you.  Each time you stack a card, you know exactly where you stand in the game.  This is great for people like me who know that each time I play Bakugan with Luke, he keeps track of the points and I always wind up losing!

, the cards are referred to as “X-Drives”. Every character and monster X-Drive features Spin Master's Blast 3D technology – 3D images that move as the X-Drive is moved by the player. Attack X-Drives also feature images that animate to illustrate the attack.

In the basic game, each player starts with one character.  When it is your turn, you draw a card from your deck, then play it immediately. The card types are monster, which are played on your own character to boost defenses and heal damage, and attack, which are played on the opponent's character. A character can have defenses in three colors – green, red, blue – and if an attack is stronger than a character's defense in that attacks color, then the attack hits and damages the character.

The cards are transparent and they stack on top of each other during play. A character's health is shown by three damage zones right on the card  When all of three of thesedmamage zones turn red, by playing one or more attacks on that character, then the character is eliminated. An attack can also cover up and remove a character's defense, while monsters can boost defenses and cover red damage zones with yellow ones, thus healing the character.

The Redakai Championship Tin set comes with an Introduction, Game Directions, and a Glossary of Terms for the game.  This was a big help to get the game started.  Also included are 43 X-Drive Cards, 3 Character Bays, 1 Card Screen with Kairu Counter, and 1 Draw Deck.The first series of cards will contain more than 100 cars and will cost from $5.99 to $29.99 for cards, action figures and accessories.  It is recommended for ages 6 and up.


SpinMaster provided me with the item above in order to facilitate this review.  All opinions are 100% mine.
Posted by Mommy at 9:16 AM 0 comments

Here's a great activity you can do with the kids to say good-bye to Summer.  You can build your own sand castle that will last forever if you want!


Directions:
Find this and more activities in the The Everything Toddler Activities Book: Games And Projects That Entertain And Educate.