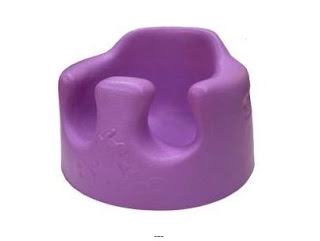 I'm sure you have heard that over 4 million Bumbo seats have been recalled recently.  I used one with Mason and I have already placed Amanda in it.  At first, I wasn't that concerned.  Mason happily sat in his many nights while I made dinner or looking out the door waiting for his Daddy to come home.  Well, since having Amanda, who is my wiggle worm, I fully understand the recall.

The risk is that if the seat is placed on a table, counter top, chair, or other elevated surface, young children can arch their backs, flip out of the Bumbo seat, and fall onto the floor, posing a risk of serious head injuries.

A repair kit is being offered by the company, free of cost to the consumer.  Bumbo International Trust has a free fix that consists of a safety belt to keep kids in place.  Bumbo's repair kit also includes a warning sticker to remind parents and caregivers not to use the seat on raised surfaces, such as tabletops.

Loving this article I read from WebMD.com.!  It is about time that J&J get on board and clean up its act when they are probably one of the top providers for children's bath products.  It just makes me sick to think that I was using these products and exposing Mason to these harmful chemicals when he was an infant.  I stopped using thier products once I found out that they contained these horrible ingredients.  I have switched to natural and organic bath products for Mason and Amanda.

By 2015, No More Controversial Chemicals in J&J Baby, Adult Products
By: Daniel J. DeNoon
WebMD Health News
Aug. 15, 2012 -- Johnson & Johnson, maker of brands including Aveeno, Neutrogena, and Johnson's Baby Shampoo, says it will remove controversial chemicals from all its baby and adult products by 2015.


The company is one of the world's largest producers of cosmetics. J&J says its products have been shown to be safe by FDA standards and its own internal tests. But safety concerns have been raised about several kinds of chemicals commonly used in cosmetics, including some probable carcinogens.

J&J announced today that by 2015 it will reformulate hundreds of cosmetic and personal care products sold worldwide. The announcement confirms commitments the company made last winter in a letter to a consumer group.

That group, the Campaign for Safe Cosmetics, co-founded by the Environmental Working Group and about 175 other nonprofit organizations, has been lobbying cosmetics companies to stop using ingredients suspected of toxic effects.
In today's announcement, J&J said it would:
"Every beauty and baby care product from the Johnson & Johnson Family of Consumer Companies is safe and effective when used as directed," the company says on its web site. "We’ve held ourselves to the very highest standards for more than one hundred years."

Lisa Archer, director of the Campaign for Safe Cosmetics, praised the company’s action in a news release and asked for other companies to follow its lead. "We call on other cosmetic giants ... to meet or beat J&J's commitments and signal they take consumer safety as seriously as their competitor."