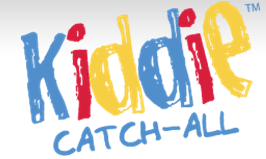 Here's the story....I am out running errands for the third time this week with Mason trying to keep him happy as we drive from store to store.  Easier said than done.  You would think I have a toy box in my car, oh right, that's the floor!  As most 2 years olds go, Mason plays with his toys for a few minutes, then moves onto whatever catches his eye.  In the meantime, toys, cups, snack traps, etc all end up on the floor. 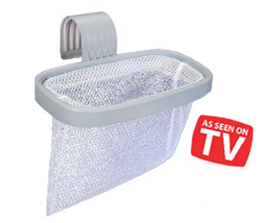 The Kiddie Catch-All may just solve the problem for parents who are constantly turning around (while driving) to give their little screaming sweetie back whatever it was that ended up on the floor.  I can now put Mason's favorite toys, cup and snacks all within his reach.  Best of all, I can pack the Kiddie Catch-All so that when Mason drops one toy, he has another right at his reach.  Like I do at home, I trade out toys about once a week so Mason doesn't get bored.

I have also learned that the easiest way to use the Kiddie Catch-All is to make sure it is filled when you start your trip.  By the time you get to your destination, chances are, it will be empty.  I take a few minutes to restock it before I take Mason out of the car seat.  That way I do clean up all at once, not while driving, and the Kiddie Catch-All is ready for the next go around!

And it is so easy to use and, more importantly, easy to get Mason to use.  The Kiddie Catch-All came with suggested instructions on how successfully get your child to use this product.  And it works!  Of course, it is age dependent on how well your child follows and understands instruction, but with patience and practice, any child can be taught how to use the Kiddie Catch-All. 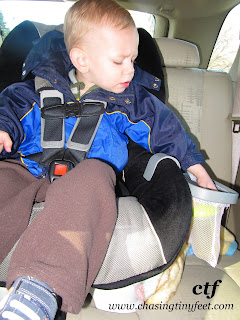 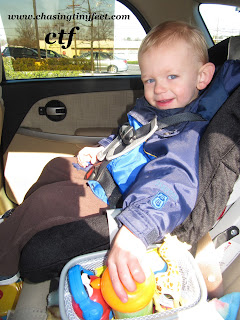 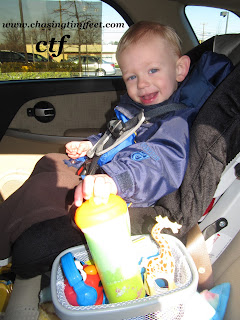 The Kiddie Catch-All fits most car seats or booster seats.  The Kiddie Catch-All will also fit most regular arm rests for children old enough to ride without a booster or car seat.  Another nice feature is that if it gets dirty, the sack is easily removable and can be machine washed.
Check out kiddiecatchall.com to order yours today.  Right now, they are offering a buy one, get one free for only $12.95 (plus S & H).

Mama Cheaps provided me with the item above in order to facilitate this review.  All opinions are 100% mine.
Posted by Mommy at 7:20 AM 0 comments

Have you heard about the new car seat recommendations yet?  I love these new recommendations and am thrilled that these new guidelines are in place.  We kept Mason rear-facing until he was 18 months old and would have gone longer except for the fact that he was in the 97% percentile for height.  At the time, we felt he was maxed at his height for the rear-facing seat.

This week, the American Academy of Pediatrics and the National Highway Safety Administration released new guidelines on car seat safety and positioning, recommending that toddlers should now stay in rear-facing car seats until the age of two.  This is a whole year longer than previously recommended!  After two, children should sit in a forward-facing car seat until the limits have been met on the seat.  Children then should be moved to a booster seat until they are 4’9” tall and between 8 and 12 years old.  In addition, children under 13 should always sit in the back seat, the two groups said.

The change was based on U.S. crash data from the past five years, which found that 1-year-olds are five times less likely to be injured in a crash if they are in a rear-facing car seat than if they are in a forward-facing seat.  Children younger than 2 have relatively large heads and small necks, and in a front-facing car seat the force of a crash can jerk the child’s head, causing spinal cord injuries, MSNBC reports.

Had the new guidelines been in place over the past 15 years, as many as 1,000 children may have escaped injury in car crashes, according to MSNBC.

Here are two articles from WebMD.com and Parents.com to help you decide what is best for your little one.

American Academy of Pediatrics Wants Kids to Stay in Rear-Facing Seat Until Age 2
By Jennifer Warner
WebMD Health News
Reviewed by Laura J. Martin, MD
March 21, 2011 -- Toddlers and even older children may have to get used to some new seating arrangements in the car, according to new child passenger safety recommendations from the American Academy of Pediatrics (AAP).
The group is revising its advice and recommending that parents keep infants and toddlers in rear-facing car safety seats until age 2 or when they physically outgrow the limits for the seat.

In addition, they recommend that when children 2 or older reach the maximum weight or height for a forward-facing seat with a harness they transition to sitting in belt-positioning booster seats until they have reached 4 feet 9 inches tall and are between 8 and 12 years old.

Once they've outgrown the booster seat, the guidelines say all children under 13 should still ride in the back seats of the car.

“Parents often look forward to transitioning from one stage to the next, but these transitions should generally be delayed until they’re necessary, when the child fully outgrows the limits for his or her current stage,” says researcher Dennis Durbin, MD, of the American Academy of Pediatrics' committee on injury, violence and poison prevention, in a news release.

The previous AAP policy, issued in 2002, advised that infants and toddlers remain in rear-facing safety seats until they reached the limits of the car seat, but cited 12 months and 20 pounds as a minimum.
Researchers say that as a result, many parents turned the car seat around on the child's first birthday.
But new research has shown that children under age 2 are safer in rear-facing car seats. A 2007 study showed children under age 2 are 75% less likely to die or be severely injured in a crash if they are in a rear-facing car seat.

“A rear-facing child safety seat does a better job of supporting the head, neck and spine of infants and toddlers in a crash, because it distributes the force of the collision over the entire body,” says Durbin.
“The ‘age 2’ recommendation is not a deadline, but rather a guideline to help parents decide when to make the transition,” says Durbin. “Smaller children will benefit from remaining rear-facing longer, while other children may reach the maximum height or weight before 2 years of age.”

Researchers say a booster seat should make the vehicle’s lap-and-shoulder belts fit properly. The shoulder belt should lie across the middle of the chest and shoulder, not near the face or neck.  The lap belt should fit low and snug on the hips and upper thighs, not across the belly.

March 21, 2011 at 2:25 pm , by Michael Kress
Today, the American Aademy of Pediatrics issued new guidelines on car seat safety and positioning. In light of the announcement, GoodyBlog asked Mitch Lipka, an expert in child safety products, to comment on the new guidelines.

Parents eager to flip their car seats from rear-facing to forward facing have some new information to consider that could change their thinking.

The American Academy of Pediatrics is now saying toddlers should remain rear-facing until they are 2 years old. For nearly a decade, the group has suggested following the guidance on the seats themselves and keeping them rear facing until a child is 1 year old and 20 pounds at a minimum.

Making the transition from rear-facing to front-facing car seats, from car seat to booster, and from back seat to front seat are among the most discussed topics by parents seeking advice about parenting. While this report from the nation’s most prominent pediatric group isn’t the law, it does carry a lot of clout and is a game-changer in the conversation about car seat safety.

In issuing its new recommendations, the AAP cited a 2007 study in the journal “Injury Prevention” that showed children under the age of 2 are 75 percent less likely to suffer a severe injury if they are in a rear-facing seat. The main issue: Support for the neck and spine is better in that position for young children.  The organization’s new policy, published in the April edition of its journal “Pediatrics” also recommends the use of booster seats until children are at least 4 feet 9 inches and between 8 and 12 years old.

“A rear-facing child safety seat does a better job of supporting the head, neck and spine of infants and toddlers in a crash, because it distributes the force of the collision over the entire body,” Dr. Dennis Durbin, the report’s author, said in a statement. “For larger children, a forward-facing seat with a harness is safer than a booster, and a belt-positioning booster seat provides better protection than a seat belt alone until the seat belt fits correctly.”

Motor vehicle accidents remain the top cause of death for children 4 and older, the Academy of Pediatrics said, although the death rate has been on a significant decline since the late 1990s. The U.S. Centers for Disease Control and Prevention estimates that every hour 150 children (from birth to 19) are taken to a hospital emergency room due to injuries suffered in car accidents.

The National Highway Traffic Safety Administration (NHTSA) says its guidelines are consistent with the academy’s recommendations. Both the academy and NHTSA say to use the age as a guideline and not push the use of the seats beyond the height and weight limits.

“The ‘age 2’ recommendation is not a deadline, but rather a guideline to help parents decide when to make the transition,” Durbin said. “Smaller children will benefit from remaining rear-facing longer, while other children may reach the maximum height or weight before 2 years of age.”

Here are some additional guidelines from the academy: