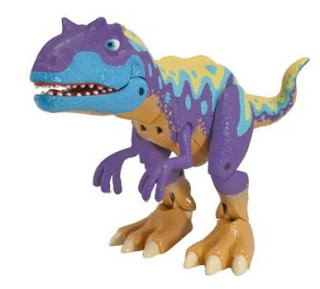 As Mason grows older, he is becoming more and more of a dinosaur fan, including getting his fill of PBS's hit show, Dinosaur Train.  He watches Dinosaur Train just about every day.  In fact, he now packs his backpack everywhere we go and totes around several of his favorite dinosaurs so he can play at any time.

Mason was thrilled to add the newest dinosaurs from the InterAction line from Dinosaur Train - Alvin Allosaurus.  Alvin is a carnivore from the Jurassic period. He has dozens of large sharp teeth and like to hunt in groups. But what makes, Alvin really cool????  Alvin "comes to life" with 50 Dinosaur Train sounds and phrases with just the push of one button.  Ok, so he talks and interacts, which is cool all by itself.  But, if you push the button on Alvin's back, you will start the "JUMP" sequence.  Alvin actually bends at the knee to leap forward.  If he is surrounded by his friends, they will react as well.

Mason loves to set these dinosaurs up and let them play and talk together.  He stomps around the house with them, roaring like a dinosaur.  I love the open ended imaginative play that he experiences each time he play with these InterAction Dinosaurs.

Alvin Allosaurus is recommended for ages 3 and up.  You can find it in stores like Toys R Us and Walmart or online at TOMYShop.com or Amazon.com.  It retails for about $ 24.99.  For more information about the Alvin Allosaurus InterAction figure and others, visit TOMY online.

Thank you to Salmon Borre and TOMY Toys for providing the item above in order to facilitate this review and giveaway.  All opinions are 100% mine.

Recently, I was at my local farmers market.  The fruits and veggys looked amazing!  On this trip I was able to get a bunch of overripe strawberries at deep discount.  The only problem...what to do with so many ripe strawberries.  I know they will spoil before we could possibly eat all of them.  So, the first thing I did was wash and freeze most of them until I could figure out what I wanted to make with these.

So I thought about it and one of the first things I thought of was a refreshing lemonade drink.  This is the first recipe I decided to try, a strawberry lemonade I found on babycenter.com via Weelicious.com.  Not only is it a great alternative to other sugary recipes, the kids can help with this too!

I strained the lemonade after everything was mixed together since I don't like pulp in my drinks.  You can also alter the amount of sugar depending on the sweetness of the strawberries.