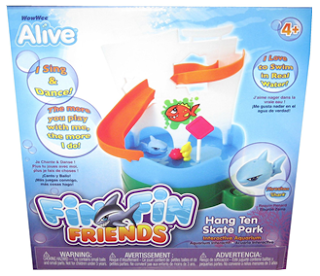 Mason is getting to the age where he loves animals of all kinds, especially fish.  I actually had him at the pet store yesterday and the first section we hit were the fish tanks.  He says, "fush", points and them and makes the fish face I taught him!  I have been considering buying Mason a fish tank for his room, but I'm not quite sure I can trust him alone with anything with water in it.  I can see it now, he will climb up to get to the tank or drink the water and possibly the fish with it.  Then there is always the question of who will clean the tank.  I digress....

Again, my problem is solve by the smart people at WowWee!  WowWee has created a line of interactive fish....yes, interactive fish! The brand new Fin Fin Friends are no doubt headed to be one of the hottest toys for this holiday season.

First off, Fin Fin Friends swim in real water.  Your new pet will "come alive" and respond to lights, sound and motion.  The more you play with them, the more they develop their own personality and different behaviors.
There are two modes that come with your fish, play mode and sleep mode.  In play mode, your fish will swim around his play set happily, but they want to be played with.  The more you play with it, the more active it becomes.  If you press the feeding button, it will make chomping sounds.  Also, if you play with your fish, you will soon discover how to train it!  There are three levels that your Fin Fin can achieve too.  The higher the level, the smarter your Fin Fin becomes.  When you talk to you Fin Fin, it will react to you.  You can feed him, watch him dance and laugh.  You can even watch him sleep.  Sleep mode is the second mode.  Your Fin Fin will find a sleep routine if he is left alone for 3-4 minutes or if you turn your aquarium off.
I set up my WowWee Fin Fin Play Set - Skate Park

and Seaside Shop play set and my little helper, Mason, was right next to me.  Of course, the first thing he did was push to button to feed the Fin Fin.  Little munching sounds came from the tank.  Not only that, but when the Fin Fin was done eating, it burped at us!   Mason loved sending the fish down the slide over and over again.  Each time the Fin Fin entered that water, the tank lit up and played music.  The Fin Fin seemed very happy and after a few times of tapping on the side of the tank, it seemed to actually swim over to where we were tapping the tank.  The Fin Fin also seemed to be be "talking" to us as he swam around.  Pretty cool!  Since this is recommended for 4 year olds and up, it was a little messy playing in the water of the play set with an 18 month old.  But, really, what can you expect, he loves water play!  When I pushed the button for the Fin Fin to go to sleep, he retreated to the back of the tank under the bridge and made sleeping sounds.
You can also buy accessory packs to go along with your new friend.  I have the WowWee Alive Fin Fin Friends Accessory Pack with Snorkel Fish

.  This pack included a Fish Friend, 3 Floaties, Decoration and Sticker Sheet.  This accessory packs retail for around $6.99. 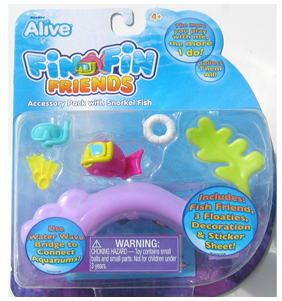 I have read in several reviews of the Fin Fin Friends that they are going to be hard to find the closer your get to the holidays.  Also, you might start to see retailers jack up the prices as they become more popular and scarce to find.
Fin Fin Friends are recommended for ages 4 and up.  There are 4 play sets in all, the Seaside Shop, Tropical Paradise, Hang Ten Skate Park, and the Caribbean Castle.  Fin Fin Friends play set retails for about $19.99-$21.99.  You can have hours of fun connecting the play sets and watching the fish play together.
﻿
WowWee provided me with the product reviewed above in order to facilitate this review.  All opinions are 100% mine.
Posted by Mommy at 9:37 AM