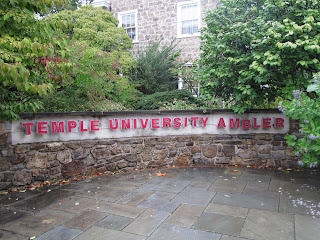 On occasion, I have received a flyer in the mail from the Infant Lab at the Temple University campus in Philadelphia, PA about having Mason participate in various studies.  The problem for me is that going to the Temple University campus in Philadelphia, PA is just not going to work for me logistically.  I am unfamiliar with the area and I always worry about finding parking.  In the previous chapter in my life, I was a teacher, so this opportunity has always been very interesting to me.  I was bummed because I would love to participate in a research study with Mason.

One night, I was wandering around the world of Facebook and found the Temple University Infant Lab, Ambler Campus.  My problem seemed to be solved.  I filled out a request for Mason to participate in a study and was contacted within days that there was a study open for him!

Upon entering the facility, we were greeted by a large variety of books, toys and puzzles for Mason to play with.  It was nice that Mason could play and get acquainted with his new surroundings before the study began.  I had to fill out some paperwork regarding Mason's current verbal skills and crawling/walking history while the coordinator spoke to me about the study details.

The study Mason participated in dealt with coordinate spatial relations and categorical spatial relations.  Researchers are trying to investigate how infants manage these types of information when both are available.  The X and + Study and Balls on Shapes Study is trying to determine if certain situations bias infants to encode coordinate and categorical information (X and +) and whether infants can combine coordinate information to give them the best estimate of the location (Balls on Shapes).  Basically, Mason sat on my lap while he watched a series of videos.  He was video taped so his eye movements could be studied at a later time.  There was one last study where he watched a computer that tracked where Mason's eyes looked when presented with different sounds and shapes.  This study looked at how he remembered where the shapes appeared and where he expected them to appear upon hearing a particular sound.

When the study was completed, Mason received a certificate and a T-shirt for his participation!

He also got to pick a toy from the prize shelf.  He picked a football! 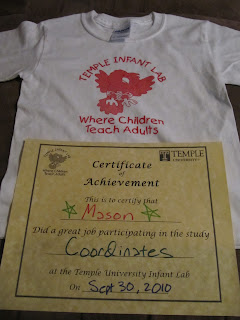 Check out the website for the Temple Infant Lab if you are interested in learning more or signing up your child to participate in a study.  They are always looking for children ages 5 months to 6 years old to participate in studies.
Posted by Mommy at 11:27 AM

Email ThisBlogThis!Share to TwitterShare to FacebookShare to Pinterest
Labels: Reviews