St. Nicholas Day...What treat did your kids get?

It is said you should learn one new thing everyday.  Today's lesson:
Today, Tuesday, December 6, 2011,  is St. Nicholas Day.  Although St. Nicholas is mainly celebrated  by Catholic and Orthodox Christians, he is also honored by various Anglican and Lutheran churches.  Saint Nicholas is the patron saint of sailors, merchants, archers, thieves, children, and students. 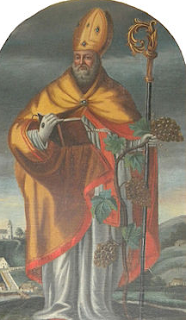 What and who is St. Nicholas?
He is known as St. Nicholas, Sinterklaas and Santa Claus among many other names.  St. Nicholas Day celebrates the life of Saint Nicholas of Myra, a fourth-century bishop best known today as the real-life model for Santa Claus.
The true story of Santa Claus begins with Nicholas, who was born during the third century in the village of Patara.  Obeying Jesus' words to "sell what you own and give the money to the poor," Nicholas used his whole inheritance to assist the needy, the sick, and the suffering. He dedicated his life to serving God and was made Bishop of Myra while still a young man. Bishop Nicholas became known throughout the land for his generosity to the those in need, his love for children, and his concern for sailors and ships.   He died December 6, AD 343 in Myra.  The anniversary of his death became a day of celebration, St. Nicholas Day, December 6th.
How is St. Nicholas Day celebrated?
As St. Nicholas was known for his love of children, various children festivals are held in his honor. Moreover, children who have been behaving well are given small gifts and candies by people who pretend to be St. Nicholas. This is in keeping with a tradition that was purportedly started by the saint himself.  Legend also has it that children put carrots, turnips, or hay in their shoes for St. Nicholas' horse or donkey and St. Nicholas would replace them with treats. So shoes filled with treats for children or feed for horses and donkeys are also symbols of St. Nicholas.

As a child I would put my shoes outside of my bedroom door with the hopes that I would receive a small treat in the morning.  And, as promised, I would receive a large candy cane stick.  This is a tradition I will be starting with Mason this year.  Even though he does not understand who St. Nick is yet, it is a tradition I hope to carry on and that it will be something he will remember and maybe pass along to his children some day.

Want some activities for St. Nicholas Day?  Click HERE for activities to print and color from stnicholascenter.org
Posted by Mommy at 8:07 AM