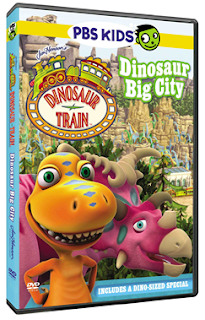 Dinosaur Train is back and rolling into train stations near you!  On August 22 you will be able to see the season premiere of Dinosaur Train: Dinosaur Big City on PBS Kids.

In “Dinosaur Big City,” join Buddy the T. Rex and his Pteranodon family as they gather all their Theropod friends together to travel to the big Theropod Club Convention which is being held in Laramidia, the “Dinosaur Big City!” Among the travelers is King Cryolophosaurus, who’s more than a little nervous about giving a concert in front of his biggest audience ever. Can Buddy and Tiny help him overcome his fear of performing?

Beginning August 1 through August 31, families can embark on their own Dinosaur Train adventure by entering the Amtrak - Dinosaur Train Sweepstakes.  One lucky family of 4 (2 adults / 2 children) will win an Amtrak Vacations® Rocky Mountain National Park Tour to visit the Rocky Mountain Dinosaur Resource Center in Woodland Park, Colorado as part of the grand prize.  You can also visit www.henson.com/Dtsweepstakes for more promotion details.

The DVD release of Dinosaur Train: Big City will be on August 23 and will be available for the suggested retail price of $14.99 U.S./$15.99 Canada.  Dinosaur Big City DVD includes eight fun and engaging learning adventures, as well as interactive games, coloring pages, a dinosaur reference guide and information for parents.  The DINOSAUR TRAIN: Dinosaur Big City DVD is presented in wide screen with Dolby Digital English Stereo and English SDH subtitles.  The run time is 100 minutes.

Do you want your own copy of Dinosaur Train: Big City?  Fill out the form and enter below.  The Giveaway will run from August 8, 2011 to August 31, 2011.  The winner will be notified by email and will asked to provide their mailing address to receive the prize.

Congratulations to Adrienne G, winner of the Dinosaur Big City Giveaway.  The winner will have 48 hours to respond or another winner will be chosen.


Thank you to Three-Sixty Marketing who is sponsoring the Giveaway for Dinosaur Train: Dinosaur Big City.
Posted by Mommy at 10:24 AM