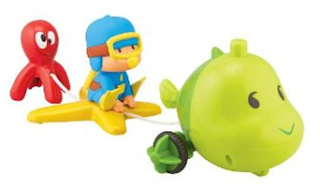 If you read my post from the other day, you are now familiar with Pocoyo and his lovable friends.  Now, your child can not only enjoy Pocoyo on television and online, but in the tub too!  Pocoyo Water Taxi

features a big green fish that pulls Scuba Pocoyo and Fred the Octopus.

When I pulled this toy out of the box, I couldn't keep Mason's hands off of it.  He was so excited and started saying "I do!, I do!".  He immediately placed it on the floor and started pushing it around.  He had a ball saying fish and making his fish faces!

He was even happier when I brought the toy into the tub later that night.  I placed the Water Taxi in the water and it floated nicely on the water.  Mason pulled the fish all around the tub and soon discovered that Pocoyo was removable from the 'starfish' he was sitting on.  I showed him how to place Pocoyo so he could sit on the fish's head for additional fun.  He really loved playing with the Pocoyo Water Taxi.

Aside from Mason loving this toy, from a parents perspective, it really is a fun toy for little ones.  It is not flashy or complicated.  There are no lights, batteries, or sounds. It is a simple plastic toy made for fun play in the tub.  I love the simpler toys that lend themselves to children using their imagination.
This is also an affordable tub toy.  Another nice feature of the Water Taxi is that it did not hold water once it was removed from the tub.  Hopefully this will cut down on possible mold growth.

﻿Three-Sixty Marketing provided me with the item above in order to facilitate this review.  All opinions are 100% mine.
Posted by Mommy at 9:12 AM