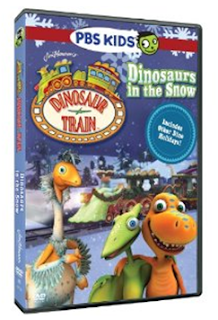 Have you become a Dinosaur Train fan yet?  What are you waiting for?  This is one of the cutest and most educational shows for pre-schoolers aged 2-5 that is out here!  Each episode is filled with facts about life science, natural history, and paleontology.  You can't go wrong with anything that includes Dinosaurs and Trains.  Now there is a new DVD, Dinosaur Train: Dinosaurs in the Snow

, just in time for your little ones for the holiday season.  And I can tell you, we have already watched this great DVD several times and I have a feeling that it will be a staple throughout the holidays!

There are eight great episodes on this one DVD.  Dinosaur Train: Dinosaurs in the Snow episodes include:

Dinosaurs in the Snow - Buddy and his Pteranodon family ride the Dinosaur Train to the North Pole - where it's cooler, and the skies are dark all winter long!;

Night Train - Dad, Buddy and Tiny take a special ride on the Dinosaur Train at night, learning about animals that are active after dark, culminating at the Big Pond for a nature walk under the full moon;

Fossil Fred - Buddy, Tiny and Don play "detective" and search around the Big Pond for fossils. The kids end up finding an entire skeleton of a Jurassic dinosaur;

King Cryolophosaurus - Buddy, Tiny, Don and Mom meet a reclusive, singing dinosaur named King who has a big swooping crest on his head and a voice that sounds an awful lot like Elvis Presley;

Dinosaur Block Party - The Pteranodon family hosts a block party to introduce their new neighbors, the Lambeosaurus family, to all the other neighborhood creatures;

Buddy's Surprise Birthday Party - Shiny, Tiny and Don throw a surprise party for Buddy on the Dinosaur Train and invite a whole caboose full of his friends!;

Mom's Day - The kids go to the Big Pond to look for flowers to give to Mom on her special Mothers Day; and

Cretaceous Conifers - The whole Pteranodon family have fun celebrating Mom's favorite holiday, Winter Solstice. You can find encore presentations of Dinosaurs in the Snow; “Cretaceous Conifers” to be broadcast on December 8, 12, 20, and 24 (check local listings).

The DVD also features an interactive game, coloring pages, a dinosaur reference guide and parent information about the program and characters. It retails for $14.99.


360 Marketing provided the item above in order to facilitate this review.  All opinions are 100% mine.
Posted by Mommy at 8:36 AM