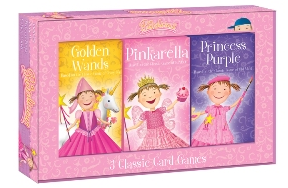 Card games are classic and never grow old.  I played card games with my grandmother every time I went over her house.  We played Gin Rummy, Fish, and WAR, just to name a few.  Those were good times.

Pinkalicious has created a new 3 in 1 set of classic card games, Pinkalicious style, of course!  The three games include Cupcake Snack, Golden Wands, and Princess Purple.

Cupcake Snack is based on the classic game of Slap-Jack.  This is such a fun game!  There are 2 versions of this game you can play.  Here is Game 1.  Players take turns flipping over a card for all to see.  When a Cupcake card is turned over, everyone has to quickly place their hand over the Cupcake card.  The first player to "eat" the cupcake wins the pile of cards.  If a player mistakenly slaps another card, they have to forfeit all their cards and return them to the draw pile.  Game 2 is for you to find out when you buy this great set!  Here's  hint: it is based on the classic game of Spoons.

Golden Wands is based on the classic game of Crazy 8's.  There are also 2 versions of this game.  In Game 1 players are dealt a hand of cards.  It is each players job to get rid of all their cards by matching the card in the discard pile by either color or number.  All Golden 8 cards are "magical" and are wild cards.  If you cannot match by color or number in the discard pile, the player must choose a card from the draw pile.  First player to get rid of all their cards wins!  Game 2 is for 2 players and is a number stacking game.

Princess Purple is based on the classic game of Old Maid.  Again, 2 versions of this game can be played.  In Game 1, all the cards are dealt to the players.  Players discard any matches from their hand.  Players offer one card to be picked, if a match has been made, those cards get laid down.  Players do this until all matches have been made and one player is left holding the Pinkalicious card. They are the automatic winner.  Game 2 is a version of the classic game, Memory, but Pinkalicious style!

These cards games are for ages 4 and up and retails for $12.99.  It is available at Walmart. 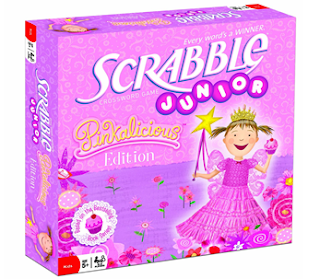 I admit, I definitely don't play enough Scrabble.  I love the game and always have a great time playing.  I will be playing more Scrabble now that Pinkalicious has now turned this fun game Pink with Pinkalicious-Junior Scrabble

Straight from out of the box, this game is adorable.  For younger players, the playing board displays fun Pinkalicious pictures and easy to read lettering.  The reverse side of the playing board allows older players to form their own words, with some suggestions along the sides for help.  The letter tiles are large and easy for little hands to manipulate.

There are two versions of Pinkalicious Scrabble.  The first on uses the pre-lettered side of the playing board.  Players take 7 letters and attempt to spell the words using the correct letters, in the correct order.  If you are the player to complete a word, you get to collect a scoring chip.  You play this game until all the letters on the board have been covered.  Then see who has the most scoring chips, that is the winner!

The second version of Pinkalicious Scrabble is more like the original Scrabble game.  Players create words on the board in crossword fashion.  Each player takes a turn creating a word, earning one point for each letter used.  Keep playing this game until all possibilities for words have been exhausted.  The players with the most points at the end wins!

This is a great game that can help enhance letter recognition and spelling skills.  Included in this game is the 2-sided playing board, 101 letter tiles, and 44 scoring chips.  This game is recommended for children ages 5 and up.  It retails for $19.99 and is available from Amazon.

If you love Pinkalicious and want to add some "Pink" to your holiday season, check back for our Giveaway starting on Monday, November 22, 2010!!!!!!

﻿
Pinkalicious provided me with the products reviewed above in order to facilitate this review.  All opinions are 100% mine.
Posted by Mommy at 8:05 AM